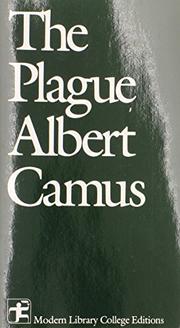 By the Frenchman who, with Sartre, shares a leading position in European literature, this is a work of considerable significance and stature, distinguished by its clarity, its composure, and above all, its scrupulous classicism. The story focuses on the outbreak of plague in Oran in the year 194-, as it reaches epidemic proportions. The author traces the crescendo of human emotions from panic to the almost unendurable agony of isolation and death. The argument extends beyond the physical impact of the plague into metaphysical terrain with the realization that each one of us carries within us the plague of injustice, of inhumanity...Distinguished by the precision, the purity of its writing, the dignity of its presentation. It may command critical rather than popular attention.