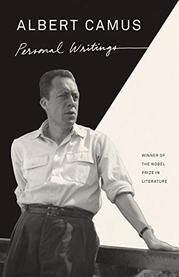 A collection of brief, piercing personal pieces by the 1957 Nobel laureate.

In a selection of essays from the 1930s to the 1950s, Camus (1913-1960) reveals himself to readers, discussing his affections, regrets, memories, problems, complaints, and ideas about art and writing. He writes frequently about his youth in Algeria (where he was born), and in a particularly poignant piece near the end, he revisits Tipasa (Tipaza), Roman ruins not far from where he grew up. He notes that “returning to places of youth” can be “a great folly,” but he clearly demonstrates otherwise in this essay. The author also writes incisively about war (both world wars), the meanings of cemeteries, the sea and sun and rain and the desert, and youth and age: “No longer to be listened to: that’s the terrible thing about being old…condemned to silence and loneliness.” Throughout are numerous classical allusions (to historical figures and events, to mythology); there’s a particularly fine piece about Prometheus and his sacrifices for humanity. “If Prometheus were to reappear,” he writes, “modern man would treat him as the gods did long ago: they would nail him to a rock, in the name of the very humanism he was the first to symbolize.” Camus sometimes chides the human race, but he sees hope in us, as well. Although he writes quite a bit about Algeria, he also describes some experiences elsewhere in the world (Paris, New York), and he sets the final essay aboard a trans-Atlantic ship. He discourses about the weather, the sailors, and the enormity of it all: “We sail across spaces so vast they seem unending.” What will strike many readers is the author’s extraordinarily evocative language, his astonishing facility to create memorable phrases and take readers to places most have never been but who, because of his artistry, feel immediately at home.

Much eloquent—often lyrical—evidence that the author deserved his Nobel Prize.