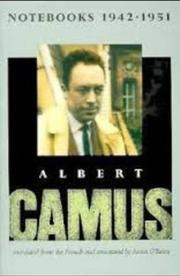 Are the journals of writers really significant? One thinks of Goethe or Gide and the answer is an automatic yes. One reads the second volume of Camus' Notebooks: 1942-1951 and , alas, no definite opinion is reached. The first entry offers a Nietzsche quotation: "Whatever does not kill me strengthens me. " And Camus adds: "Yes , but... how painful it is to dream of happiness." Here's the last entry (and by now Camus is 37): "Any fulfillment is a bondage. It obliges one to a higher fulfillment." Such is the nature of progress. Camus died young, relatively speaking. It is customary to think of him as the conscience of an age, and for page after page we are confronted with moral concerns, moral imperatives, and the pressure of events: the Resistance, the Cold War, the themes of Exile and of Absurdity, the question of Ideology. We learn of the philosophic and personal preoccupations behind The Stranger, Sisyphus, Caligula, The Rebel; we get snatches of the existentialist temper within Parisian circles; we view the dramatic break with Marleau-Ponty and Sartre; we follow Camus' political quest, his quarrel with Marxist abstractions, his hatred of totalitarianism. Fully acquainted with modernist negativity, he sought Mediterranean reasonableness, classical "lucidity," and- can it be denied?- romantic individualism. In The Rebel he stated: "Analysis of revolt leads at least to the suspicion that there is a human nature, as the Greeks thought, and contrary to the postulates of contemporary thought. " No wonder he was in conflict with Sartre; actually, he was in conflict with "the age." The appeal of Camus—as the Notebooks show over and over—is a nostalgic one. We respond not to his intellectual, rigor, but to his heroic invocation. In a dehumanized era he held to "boyish" ideals, to giving to life courage, beauty, style.