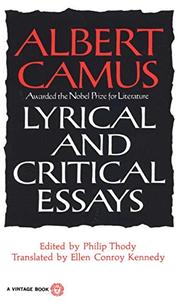 In one of his nastier moods, Sartre accused Camus of writing like Chateaubriand. The essay-portraits of Algiers and Oran, the nostalgic evocations of Camus' Mediterranean background, his buoyant, often dramatized philosophical love affair with nature—these were the parts of Camus' temperament that Sartre found at odds with the prevailing existentialist gloom of the post-war period when he and Camus held an uneasy alliance as spokesmen for their age. Sartre represented a soi-disant authentic anguish ultimately leading to social revolt, Camus the enigma of a passionate man who sought to triumph over the innate absurdity of life. Lyrical and Critical Essays comprises Camus' youthful reflections. L'Envers et l'Endroit; his two brilliant summations of the sensual world. Noces and L'Etc. both of which shed much light on the varying landscapes of his major novels; and his stray reviews (including comments on Sartre's fiction), interviews, and assorted marginalia. These newly translated works are of inestimable importance in reaching some understanding of Campus' personality, his relationship with traditional values, and (to return to Sartre) the qualified Romantic animism in Camus' style and feeling. In a sense, Sartre is right. There is something intellectually equivocal, even hortatory, in Camus' paradoxical celebration of lucidity amid nihilism, participation amid withdrawal. But Camus is more the measure of man and man's physical and spiritual union with the universe, however idealized.