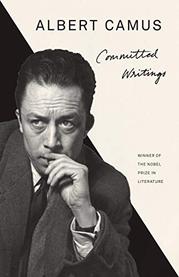 A focused collection of the political and moral writings and speeches by the Nobel laureate.

After a fresh foreword by Camus scholar Alice Kaplan, the compilation begins with four letters Camus (1913-1960) published during World War II, purportedly to a German he knew but who is likely the author’s creation. The letters assail the Germans for what they have done—and continue to do—with fierce candor: “violence is more natural to you than thinking”; “you scorned knowledge and spoke only of strength.” The longest piece is “Reflections on the Guillotine” (1957), which describes and condemns capital punishment, employing logic, passion, grim detail, and skillful prose. Camus begins with his father’s vomiting after witnessing a beheading; later, he includes a horrible description of another beheading gone wrong. The author argues that capital punishment is not punishment but “revenge” and includes comments about how the death penalty is related to religious history. The volume concludes with two speeches related to the author’s acceptance of the Nobel Prize in literature. The first is the official speech he gave at the ceremony in Stockholm; the second, a lecture he delivered at Uppsala University. In the first, Camus is humble and grateful and talks passionately about the significance of his art in his life. The second explores the idea of realism in literature—and how absolute realism is impossible. It would require, he writes amusingly, the author to devote their life to following the entire life of another. Camus is also playful with the old metaphor of the broken eggs and the omelet: You don’t need to break thousands of them to make one omelet. The author ends by saying that truth should be the aim of the artist.

Throughout, Camus’ talent, humor, and passion glisten like rare jewels.