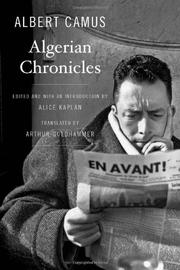 In a manner less literary than journalistic but more personal than political, the Nobel Prize–winning existentialist argues for a liberal middle ground between French imperialism and the independence of his native Algeria.

More than a half-century after the Algerian War and the independence that Camus ambivalently resisted, the first English translation of his volume of writings on the period (a book largely ignored or disdained upon its initial French publication) is less interesting today for the specifics of the polarized tension there than for its timeless musings on torture, terror, assimilation and extremism. The anti-independence French accused the Algerian Muslims of savagery. Those who were pro-revolution believed that there was no room for the colonial occupiers in an independent Algeria. As a French liberal who considered himself a moderate between those extremes, Camus had boundless sympathy for the plight of impoverished Algerians, yet he felt that independent rule by a Muslim majority would be a catastrophe for those (like himself) who were French but had deep roots in Algeria. Ultimately, his writing represents a moral plea for an idealism beyond politics. He maintains: “We are condemned to live together.” “It is as if madmen inflamed by rage found themselves locked in a forced marriage from which no exit was possible and therefore decided on mutual suicide.” He also insists that regardless of how “old and deep the roots of the Algerian tragedy are, one fact remains: no cause justifies the deaths of innocent people.” However his words were received at the time and the crisis he addressed resolved itself, his thoughts on ends justifying means and on civilian casualties for some political purpose seem prophetic.

A political footnote to a literary legacy.