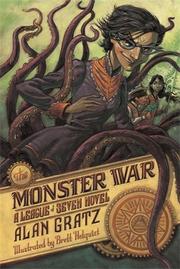 From the League of Seven series, volume 3

Seven young heroes, together at last and diverse in many ways, tackle armies of monsters as well as a cycle of warfare that has turned for thousands of years.

“League of Seven—full steam ahead!” In this headlong climax, Gratz adds the final two members to his intrepid band of world savers: tattooed, gray-skinned “science-pirate” Martine, whose synesthetic perceptions come in handy more than once; and Gonzalo, a blind young Texas Ranger with a talkative, intelligent raygun dubbed Señor X. Colorful as these and the other League members are, both in the story and in Helquist’s stylish portraits at each chapter’s head, the central figure remains Archie Dent, a superstrong lad snow-white of skin and hair and made from solid rock. Here, as previously, Archie’s internal struggles with rage and guilt parallel a string of awesomely destructive battles he and his allies have with the immortal Mangleborn and part-human Manglespawn led by tentacled archnemesis Philomena Moffett. Following a climactic battle at Gettysburg and a final dust-up with Moffett atop the great statue of Hiawatha in the harbor of New Rome (this is a very alternate, clockwork America), it only remains to expose the secret Septemberist Society, whose suppression of scientific research has misguidedly perpetuated the Mangleborn’s cyclical return down through the centuries.