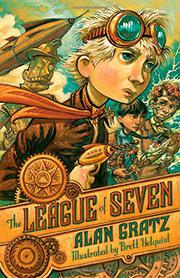 THE LEAGUE OF SEVEN

From the League of Seven series, volume 1

Gratz works an unusual twist into the familiar teens-saving-the-Earth-from-monsters trope: The protagonist is both archetypal hero and, at least potentially, nemesis.

Said twist adds major complications as this opener brings together the first three of seven young team members, each specifically typecast, destined to battle the Mangleborn—huge, unkillable monsters that previous Leagues of Seven have tackled at regular intervals down the ages. In an alternate 1875, a giant statue of Hiawatha stands in the harbor of the United Nations’ (rather than States’) New Rome, and technology is based on clockworks rather than electricity. An attack on his librarian parents and the secret Septemberist Society to which they belong leads 12-year-old Archie, his wind-up sidekick, Mr. Rivets, and two capable new friends into a desperate scramble to keep the insectile Mangleborn Swarm Queen from escaping her subterranean prison in Florida. Archie’s discovery that, like his doomed predecessors Heracles and Cú Chullainn, his special powers come with a dark side leaves him (not to mention his fellow League members) profoundly disturbed at the close. (Helquist’s illustrations not seen at time of review.)