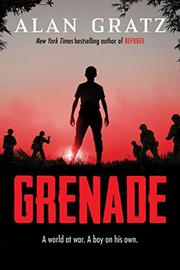 In the waning days of World War II, two young soldiers tell both sides of their fight to survive.

It’s 1945, and Okinawa has been forced into the middle of the war between Japan and the United States. Thirteen-year-old Okinawan Hideki has been drafted to fight in the Imperial Japanese Army. Told the Americans are “monsters,” Hideki is sent off with two grenades, one to kill as many Americans as possible and one to kill himself. Meanwhile, Ray, a young, white American Marine, has landed on the beaches of Okinawa for his first battle. Only knowing what he has been taught and told, Ray is unsure of what to expect facing the Japanese army and also the Okinawan civilians—who are “simple, polite, law-abiding, and peaceable,” according to an informational brochure provided by command. Switching between the two perspectives of Hideki and Ray, Gratz (Refugee, 2017, etc.) has created a story of two very harsh realities. He shows what happens to humans as the fear, violence, and death war creates take over lives and homes. The authentic telling can be graphic and violent at times, but that contributes to the creation of a very real-feeling lens into the lives changed by war. A large-type opening note informs readers that period terminology has been used for the sake of accuracy, and a closing author’s note elaborates on this.

Intense and fast-paced, this is a compelling, dark, yet ultimately heartening wartime story.