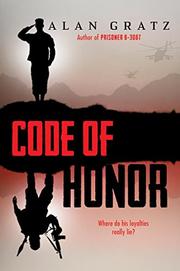 An Iranian-American teen's faith in his beloved brother is pushed to the limit when it appears that he may be involved in a terrorist attack on the U.S. Embassy in Turkey.

High school senior Kamran and his parents are stunned when his brother, Darius, a U.S. Army Ranger, appears in a video following the embassy bombing, disheveled and rambling, claiming responsibility for the attack. The family's descent into a constantly monitored nightmare of confusion is believably horrific. When Kamran notices that Darius seems to be slipping references into his posted videos about imaginary games they used to play as children, his parents don't believe it could be a clue that all is not as it seems. Only when Kamran is wrested from his home by Homeland Security, bound, drugged, and spirited away to an unknown detention facility, does he meet an ally. Readers will be swept up by both the intrigue of puzzling out the truth behind Darius' presumed guilt and by the rapid pacing. Short, intricately plotted chapters spur the story forward, and the audience will be constantly unsure about who can be trusted. Action sequences are a little unlikely; readers may find it hard to believe that one teen can take on so many militarily trained adults.

Quibbles aside, Kamran is a smart and sympathetic narrator, and readers will be happy to spend time with him in this action-packed thriller.