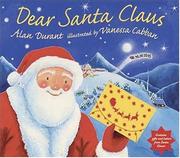 A little girl named Holly corresponds with Santa during the month of December in this holiday offering that includes her hand-printed letters as part of the text and removable notes (and other tiny treasures) from Santa tucked into small, attached envelopes. The story alternates between Christmas preparations at Holly’s house and those at the North Pole, with detailed watercolor illustrations of Holly and her little brother alternating with scenes of the elves and Santa hard at work. The five envelopes with notes from Santa also include a miniature advent calendar, a paper Christmas ornament, a guide to reindeer (including jokes) and a shiny, plastic ticket good for one sleigh ride with Santa. The sleigh ride was Holly’s special Christmas gift, requested at the very last moment despite repeated reminders from Santa in his notes to get those gift requests in early. The magical messenger service provided by the elves and the thrilling sleigh ride add excitement to the plot, but the main draw here is the little envelopes with the goodies inside, which make this unsuitable for most library collections but a likely gift idea for doting grandmas. (Picture book. 4-7)