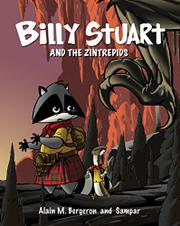 BILLY STUART AND THE ZINTREPIDS

From the Billy Stuart series

by Alain M. Bergeron ; illustrated by Sampar ; translated by Sophie B. Watson

In this Canadian import, translated from the French, a young raccoon named Billy Stuart sets out on an adventure through time.

Kilt-wearing Billy lives in the town of Cavendish, where he begrudgingly walks his neighbors’ poodle, FrouFrou. Billy also leads the Zintrepids, a scout troop of five animals (well, six, if you include FrouFrou). One day, a letter from Billy’s grandfather arrives, inviting Billy to join him at a newly discovered passageway through time in Belcher’s Cavern. But there’s a snag: Billy’s grandfather’s journey is the same day Billy has a forest hike with his scout troop! Can he complete the hike and also see his grandfather? Told mostly in first person from Billy’s perspective, the narrative sets some words apart in bolded, brightly colored type to add emphasis. Numerous yellow sticky notes (from author Bergeron, who claims to have met Billy) corroborate the story’s events. Sampar’s full-color cartoon illustrations add a cinematic quality, especially in the text’s occasional comic-book panels. Simple vocabulary, ample leading, and supporting spot illustrations make this a good transitional chapter book. Still, the overall narrative structure juggles too much and sacrifices plot for the sake of its own cleverness. Some puzzle games are included between chapters—though they are not referenced in the plot. The ending suggests future adventures for the Zintrepids.

An interesting series opener that gets lost on its own trail.