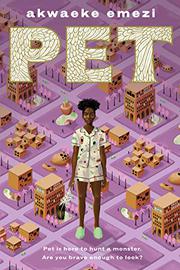 Teenager Jam unwittingly animates her mother’s painting, summoning a being through a cross-dimensional portal.

When Pet, giant and grotesque, bursts into her life one night, Jam learns it has emerged to hunt and needs the help of a human who can go places it cannot. Through their telekinetic connection, Jam learns that though all the monsters were thought to have been purged by the angels, one still roams the house of her best friend, Redemption, and Jam must uncover it. There’s a curious vagueness as to the nature of the banished monsters’ crimes, and it takes a few chapters to settle into Emezi’s (Freshwater, 2018) YA debut, set in an unspecified American town where people are united under the creed: “We are each other’s harvest. We are each other’s business. We are each other’s magnitude and bond,” taken from Gwendolyn Brooks’ ode to Paul Robeson. However, their lush imagery and prose coupled with nuanced inclusion of African diasporic languages and peoples creates space for individuals to broadly love and live. Jam’s parents strongly affirm and celebrate her trans identity, and Redemption’s three parents are dedicated and caring, giving Jam a second, albeit more chaotic, home. Still, Emezi’s timely and critical point, “monsters don’t look like anything,” encourages our steady vigilance to recognize and identify them even in the most idyllic of settings.

This soaring novel shoots for the stars and explodes the sky with its bold brilliance.