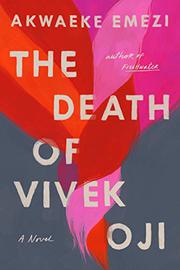 THE DEATH OF VIVEK OJI

The author of the young adult novel Pet, a finalist for the 2019 National Book Award, offers another exploration of gender identity, this time for adults.

This book’s title leaves no doubt about the fate of its central character. Nor does the first chapter, which is one sentence long: “They burned down the market on the day Vivek Oji died.” Then the story moves into the past to introduce Vivek’s father, Chika, as he is about to meet Kavita, the woman who will become his wife and Vivek’s mother. The next chapter is told from the perspective of Vivek’s cousin, Osita. As the narrative moves around in time and from viewpoint to viewpoint, Emezi offers a richly textured depiction of a middle-class community in Nigeria—one that includes several immigrants, among them Vivek’s Indian mother. In these early chapters, there is no sense of the tragedy that’s coming. The first hint of trouble ahead is when Vivek starts slipping into fugue states. Eventually, Vivek will explain that these were moments when the burden of living an inauthentic life became too much to bear. When Vivek lets his hair grow long and acknowledges his true sexuality, he experiences some relief from this stress, but new problems arise—including an aunt who thinks he’s possessed by demons and boys who throw bottles at him. He is only just beginning to express his true self openly when he dies. Only a handful of chapters—most of them very brief—are told from Vivek’s point of view. There’s something heartbreaking about the fact that his story can only be told by others, especially since some of them never saw him as he wanted to be seen. And Osita—who loved Vivek and knew him better than anyone—cannot say everything he knows. Even so, the novel ends on a note of hope.