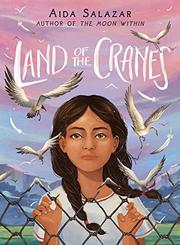 LAND OF THE CRANES

A fourth grader navigates the complicated world of immigration.

Betita Quintero loves the stories her father tells about the Aztlán (the titular land of cranes), how their people emigrated south but were fabled to return. Betita also loves to write. She considers words like “intonation,” “alchemy,” and “freedom” to be almost magic, using those and other words to create picture poems to paint her feelings, just like her fourth grade teacher, Ms. Martinez, taught her. But there are also words that are scary, like “cartel,” a word that holds the reason why her family had to emigrate from México to the United States. Even though Betita and her parents live in California, a “sanctuary state,” the seemingly constant raids and deportations are getting to be more frequent under the current (unnamed) administration. Thinking her family is safe because they have a “petition…to fly free,” Betita is devastated when her dad is taken away by ICE. Without their father, the lives of the Quinteros, already full of fear and uncertainty, are further derailed when they make the small mistake of missing a highway exit. Salazar’s verse novel presents contemporary issues such as “zero tolerance” policies, internalized racism, and mass deportations through Betita’s innocent and hopeful eyes, making the complex topics easy to understand through passionate, lyrical verses.

An emotional and powerful story with soaring poetry.