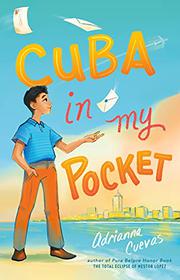 CUBA IN MY POCKET

To escape the harsh realities of Castro’s Cuba, a 12-year-old boy must leave his family behind and flee to the United States alone.

Following the failed Bay of Pigs invasion, Fidel’s grip on Cuba tightens. Neighbors whisper and conspire against each other, and those not loyal to Castro’s regime face punishment, even execution. When young Cumba is marked for military recruitment, his family decides to send him off to the United States. Escaping to Miami and the home of a distant relative, Cumba struggles to adjust to his new life without his family. The labyrinthlike city’s size and the cacophony of English-speaking voices overwhelm the young boy at first. School also brings its share of pains and embarrassments. Thankfully, Cumba gains allies in the unlikeliest ways, including an American schoolmate obsessed with horse races and other Cuban refugee young people. Letters from his little brother back home also bring him some comfort. Then, one day, a letter brings horrible news: Fidel’s soldiers have arrested Cumba’s parents. Inspired by stories from her father’s childhood, Cuevas’ latest is a triumph of the heart. Devoting half of the story to Cumba’s life in Cuba and the other half to his adjustment to the United States, the author continually reminds readers about the strength provided by community and family and the forces that can threaten to snatch these sources of happiness away.

A compassionate, emotionally astute portrait of a young Cuban in exile.