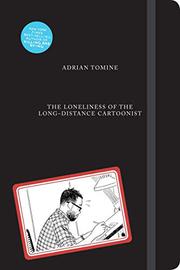 THE LONELINESS OF THE LONG-DISTANCE CARTOONIST

A lifelong obsession with comics results in less reward than the author and illustrator might once have thought possible.

In his latest book, Tomine, who has been successful by nearly any measure—his oeuvre includes many minicomics and books and several New Yorker covers—delivers an understated yet illuminating graphic memoir full of insights on the creative process and the struggles of defining “success” in the world of comics and graphic novels. Early on in the narrative, the author is something like a younger Rodney Dangerfield, frustrated by a lack of respect. Schoolmates taunted him, and even the acclaim he earned as a teenage prodigy—“the boy wonder of mini-comics”—was short-lived, crushed by a backlash review that dismissed him as a derivative “moron.” The rites of passage that seemed like markers of success—Comic-Con, book signings, tours, awards ceremonies—generally left Tomine feeling deflated and resentful. Instead of reveling in the acceptance he received from the New Yorker and elsewhere, the author dwelled on the slur of dismissal as a Japanese American that he received from one veteran artist. Throughout his narrative, Tomine expresses feelings of inferiority to the more celebrated Neil Gaiman and Daniel Clowes—though an epigram from the latter, on how being a famous cartoonist is “like being the most famous badminton player,” proves telling. Even marriage and fatherhood failed to resolve Tomine’s insecurities or anger issues, and readers will begin to suspect that what’s at issue isn’t the lonely profession the author has chosen but rather problems of self-acceptance. A medical scare provided a reckoning and a realization that his obsession had become his albatross and that he needed to put his life in perspective. Upon reaching this “turning point,” he heads back to the drawing board—hopefully, for many more years to come.