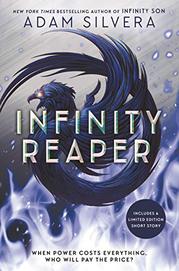 From the Infinity Cycle series, volume 2

The war between the Spell Walkers and Blood Casters rages on.

This fast-paced sequel to Infinity Son (2020) starts with Brighton drinking Reaper’s Blood, an elixir that might give him the powers he so desperately craves. Meanwhile, his brother, Emil, is in critical condition after trying to prevent the elixir from being made. As the brothers regroup and recover, celestial-hating Sen. Iron coerces his son, Ness, to use his shape-shifting abilities to impersonate and further stigmatize gleamcrafters. Maribelle tracks down her lover’s murderer to exact revenge. Despite their different methods, the Spell Walkers each share the goal of finding a way to defeat the Blood Casters and right the world. But as Brighton’s new powers manifest, his views on those heroics start to change. Can they still save the world? First-person narration jumps between the same four characters from the first book but delves even deeper into their individual stories. Silvera also adds the sizzle of sexual tension as the brothers each navigate feelings for their respective crushes—and for Emil, a new boy further complicates things. Aided by a necessary glossary, the ambitious worldbuilding expands to include even more magical parallels to real-life America (e.g., wand violence, enforcer reform, and alternative facts). The cast continues to be mostly brown-skinned and/or queer. Another cliffhanger ending adds to the anticipation for the final book in the planned trilogy.

An ambitious entry in a series that continues to improve.