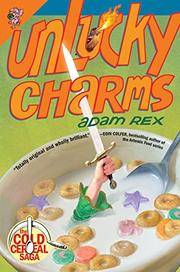 In this hectic middle volume, Rex’s notably diverse crew of human, part-human and nonhuman allies splits up in hopes of scotching the schemes of the sorceress Nimue, who is out to create a worldwide army of mind-controlled “sugar zombies” through magically enhanced breakfast cereal.

Rex fills in background as he goes, from doughty pixie Prince Fi’s search for his brothers Fee, Fo and Denzil to Merle Lynn’s exposé of his sword-in-the-stone trick (“It was magnets”). The action here takes place mostly in England, where the discovery of a portal to magical Pretannica allows separate missions to seek help from the queen of the Fay and to rescue the kidnapped queen of England, who has been imprisoned in what she thinks (with some justice) is a Harry Potter story. Meanwhile supergenius Emily, sasquatch ex-librarian Biggs and the others stay stateside to work on cryptic clues (what would a story like this be without cryptic clues?) and prevent Nimue from seizing the portal. Much of the frequent black-and-white art was not available for review, but those examples included exemplify Rex’s usual hilarity.

A mad mix of attacks, chases, squabbles and revelations goose the main plot along while setting the stage nicely for the closer.