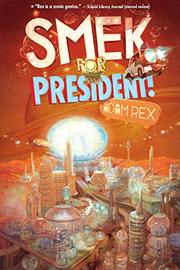 Gratuity “Tip” Tucci doesn’t see why her mom won’t let a 13-year-old who saved the world take an off-planet vacation.

Two years after saving the world in The True Meaning of Smekday (2007), biracial Tip and her extraterrestrial best friend, J.Lo, need a holiday. They jet off to New Boovworld (otherwise known as Saturn’s moon Titan) in Slushious, their flying car. J.Lo’s wanted on New Boovworld for his part in the near-destruction of Earth two years ago, but he’s sure everything will be fine if he just explains things to the HighBoov-for-life, Capt. Smek. The situation on New Boovworld is complicated: The Boov are holding elections for HighBoov. In election season, every politician loves an enemy of the state, and so J.Lo is recast as the Squealer, condemned to imprisonment in eternal silence. Only Tip can save him, with the help of a bubble-blowing bee named Bill, Funsize the garbage man and the imagined ghost of her old friend the Chief. It's a little less quirky than the last adventure (the Boov’s seven magnificent genders are paid lip service, with important characters either male or female and even following Earth stereotypes), but still, plenty of gleeful ridiculousness adorns this outing, which is illustrated with Rex’s own fanciful comics. The book is out just in time for the release of the movie adaptation of Book 1 (as Home, due out spring 2015).

This sequel shares the strengths of its predecessor: the loving friendship between Tip and J.Lo, the respect for the absurd, and the social consciences of the teen protagonist and her ET BFF