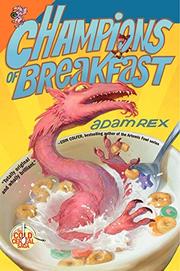 Sorceress Nimue’s mad scheme to transport the Seelie Court to New Jersey with help from swarms of breakfast-cereal sugar zombies comes to fruition in this capper to the Cold Cereal Saga.

Readers are best advised not to start with this episode. Picking up the multistranded plot roughly where it left off in Unlucky Charms (2013), Rex sends one band of doughty heroes off to face the pink but deadly dragon Saxbriton and another to bring the rescued, if now-miniature, queen of England back to this world despite such challenges as a monstrous “ronopolisk” whose “mere glance can turn a man to stoat!” Meanwhile, a third group falls (back) into the clutches of the sinister sorceress, and a fourth that includes pixie princes Fee, Fi, Fo and Denzil take on a troll guarding a gateway to magical Pretannica. None of these efforts ultimately prevent Nimue from opening a massive rift that threatens to destroy more than just the Garden State, but a climactic scramble at the Goodco cereal factory leads to a dramatic if messy save in which Merlin, Excalibur and its long-lost scabbard figure prominently.

King Arthur, were he dead, might spin in his grave, but Rex brings his cereal serial to a close with snap, crackle and pop aplenty.