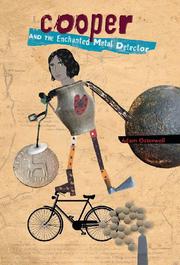 COOPER AND THE ENCHANTED METAL DETECTOR

A young boy’s life takes an unexpected turn when he receives an old metal detector.

Cooper lives with his mom in upstate New York, where they run an antiques store in an old barn. Although he’s only 11 years old, Cooper manages the household and store. His mom, who used to bring Cooper to garage sales, changed after Cooper’s little brother died and his dad left. Now Cooper pays the utility bills with money he keeps in an old coffee tin and ventures to garage sales alone to find items for the store. Much to the dismay of Mr. Shepherd, the director of the town’s historical museum, Cooper has a knack for getting into sales early to snag the best items. When Cooper unexpectedly leaves a yard sale with a metal detector and finds 12 musket balls from the Revolutionary War in his backyard, it sets in motion a chain of events that will change his life forever, revealing not only history buried deep in his backyard, but family secrets as well. Narrated in the first person by Cooper, Osterweil’s novel reveals the inner workings of a sensitive boy trying to figure out how to help his family survive. Cooper’s active imagination is a stark contrast to the responsibility he assumes at home: He finds friendship in Decto, the french-fry–eating metal detector, and Squeaky, his rickety bicycle, among other objects. Cooper’s exchanges with these imaginary friends add enough silliness to keep young readers engaged. However, lengthy passages about battles, as told by Mr. Shepherd, slow the narrative’s flow and often feel dry, especially when compared to Cooper’s vibrant voice. Still, budding historians will have the opportunity to learn about an important moment in U.S. history—and may even be inspired to pick up a metal detector of their own.

A poignant coming-of-age story and history lesson rolled into one. (Fiction. 10-13)