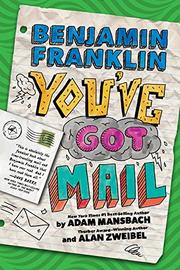 From the Benjamin Franklin series

Franklin Isaac Saturday mails himself in a box back to the 18th century to help out his pen pal and good buddy, “B-Freezy.” Dude!

It’s the least Ike can do, seeing as how previous gifts from the future (as detailed in Benjamin Franklin: Huge Pain in My…, 2015) have turned Franklin into a homeless fugitive and threaten to derail the whole American Revolution thing. Thinking that a quick trip overseas could solve both problems, the white middle schooler and his irritable but indulgent ally take ship in Philadelphia—meeting onboard certain other Founding Fathers Ike dubs “T-Jeff” and “Johnny Adrock”—to appeal for aid from the king of France. Unfortunately, a rendezvous with a few too many iffy oysters along the way leaves Ike to make the actual appeal while B-Freezy and his diplomat buds ralph in the background. Related in a mix of first-person narrative, diary entries from Franklin, and long letters exchanged between Ike and his Asian-American 21st-century girlfriend, Claire Wanzandae, the tale may strain readers’ ability to go with the flow (no kidding). Still, it should leave them respecting both the awesomeness of the U.S. Postal Service (Franklin’s invention!) and the resourceful protagonist, who may be slow to realize that Marie Antoinette wasn’t the discoverer of radium but shows an ability to rise eloquently to the occasion when needs must.

Who says a middle schooler can’t change history? It’s all about being in the right place—and time.