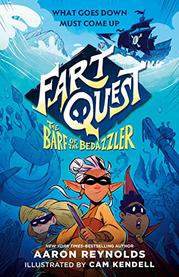 THE BARF OF THE BEDAZZLER

From the Fart Quest series, volume 2

The fearless apprentices are back with more adventures as they try and prove themselves as heroes.

Moxie Battleborne has become stronger, wielding her weapon like a proper Level 2 hero; Pan Silversnow, particular as ever, has increased her abilities—but Fart is still working on beginners’ skills. It’s been one month since they’ve been on their own after their masters were killed by goblins, and Fart yearns to be further along, mastering the most difficult spells. Now that the three have more experience under their belts, the Great and Powerful Kevin sends our favorite phibling assistant, TickTock, to retrieve the heroic trio for his next perilous quest. Kevin needs the barf of a bedazzler, a rare and potentially deadly creature. The trio sets off to the city of Wetwater in search of Diremaw the Dread, a menacing pirate captain who supposedly knows the whereabouts of a bedazzler. Along the way, they are kidnapped by muck elves, made to defeat the muck man SquishRabble, and robbed by a mischievous crew. Through it all, the friends stick together, overcoming assumptions about themselves and one another. Simple, humorous text and compelling action sequences from start to finish make this a fun, accessible read. Black-and-white illustrations convey helpful information in an amusing and succinct manner, often extending the meaning of the text. Pan is cued as Asian; Moxie appears White; Fart reads as Black.

A rousing and wholesome sequel.