A writer from a young age, Tanya E Williams loves to help a reader get lost in another time, another place through the magic of books. History continues to inspire her stories and her insightful view into the human condition deepens her character's experiences and propels them on their journey. Ms. Williams' favourite tales, speak to the reader's heart, making them smile, laugh, cry, and think. 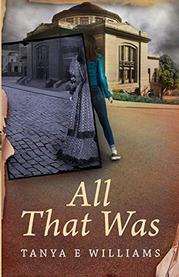 In Williams’ paranormal novel, the spirits of a historic church inspire a young lawyer to accept the loss of her parents.

Twenty-six-year-old Seattle native Emily Reed is as guarded as she is intelligent. Her parents died in a car accident 10 years ago, but instead of grieving, she coped by excelling academically. After graduating from law school, Emily was recruited by a firm representing a church in a dispute regarding its landmark designation. Her first assignment is to organize the church’s archives, and she’s surprised to learn that the church is where her parents wed. Ryan, Emily’s boyfriend, joins her guardians in urging her to seek counseling and let herself grieve, but she refuses. At the church, Emily discovers diaries dating back to 1915 and becomes immersed in the life of Elizabet Thomas, a socialite and philanthropist. Unbeknownst to Emily, the spirits of Elizabet and her friend Dorothea, an eccentric madame, are watching her and even meddling in her life. Ever since the passing of Elizabet’s husband in 1922, she’s never stopped grieving—even in the afterlife. The novel is a well-crafted cautionary tale—against self-pity, in Elizabet’s case, and pride, in Emily’s. Williams achieves a striking narrative symmetry, not unlike the architecture of the church that she beautifully describes; each element of the sanctuary seems to have a story to tell: “The pipe organ stands proud and tall on the upper balcony, like a soldier standing at attention, waiting patiently for someone to spur it to life.” Some readers may object to the story’s ending, which is perhaps overly tidy and sentimental. That said, there’s much to celebrate in this book, including its memorable depiction of courage: “You must only be brave for one moment at a time.”

A battle-scarred father. A disillusioned daughter. Can a grieving widower rebuild his splintered family to find peace at last? South Dakota, 1949. WWII veteran John Smith longs for the life he lost after the tragic death of his wife during childbirth. But in the desperation to provide for his two small children, he is manipulated into an unsuitable marriage by a young woman with a dark neurosis. Tormented by his own grief and the ravages of war, John is blind to his children’s turmoil and pain. Washington State, 1964. John’s sixteen-year-old daughter Calla dreams of a life beyond her vindictive stepmother. Forced to care for her younger siblings with a list of household demands larger than she is tall, Calla knows it’s only a matter of time until she can escape the abuse and begin anew at college. But her dreams crumble when her heartless stepmother claims the college fund for her own selfish purposes. As John fears he is too late to stop the war within his home, Calla vows to build a new life worth living. Can John survive the consequences of war on the home front? Can Calla find the strength to rediscover the meaning of family? A Man Called Smith is the heartwarming and heart wrenching story following the life of John Smith. If you like courageous characters and narratives told over multiple generations, then you’ll love Tanya E. Williams’ emotional tale.
Published: Aug. 13, 2019
ISBN: 978-1989144046

Not all of war's destruction takes place on the battlefield. A heart warming tale of love, life, and friendship. Becoming Mrs. Smith is sure to transport you back in time to pre-war, small town America where a young couple's love story begins to unfold. Violet's heart flutters from the scarlet fever she survived as a child, and it beats faster at the sight of John Smith, the man she plans to marry. America is entrenched in WWII, and when John enlists, Violet is certain she won't ever forgive him for dashing their dreams. As the realities of war slowly overtake her life, Violet's days are filled with uncertainty and grief. She struggles to maintain her faith in John, as the world as she knows it, crumbles around her. Becoming Mrs. Smith is a beautifully written, emotionally charged novella that paints a vivid picture of the life and times of America's home front during World War II. The inspiring, and at times, heartbreaking story of a woman's struggle to reclaim what she lost is both poignant and heartfelt. War stole the man she loves, and childhood illness weakened her heart--perhaps beyond repair. While guns rage in Europe, the war Violet faces at home may be even more devastating.

She’s desperate to escape misfortune. Her quest may cost her everything… South Dakota, 1948. Bernice Rosin refuses to settle for anything less than a happily-ever-after. Following the ordeal of caring for her dying mother only to be abandoned at an orphanage, she’s had enough misery to last a lifetime. Heading west for the luxury of the big city, she vows to find someone who can keep her safe and financially secure. But her reckless search for a suitor only leads to heartbreak and scandal. So when she meets a soft-spoken WWII vet with more to offer than money, she knows she’ll need a whole new set of charms to make it to the altar. Can Bernice free herself from the past and finally discover a place she belongs? Stealing Mr. Smith is a stand alone story in a compelling historical fiction family saga. If you like emotional journeys, troubled characters, and thought-provoking dilemmas, then you’ll love Tanya E Williams’ engaging novel.
Published: Sept. 25, 2018
ISBN: 978-1775070658