He has been featured on NBC National News, and in hundreds of television interviews, magazine features, and newspaper articles. He was a Vietnam Vet and a Navy Bomb Disposal Diver (EOD Frogman) who worked for the Secret Service, the CIA and NASA. A marijuana misdemeanor destroyed his 14-year career and led to him becoming a defendant in the John Z. DeLorean Case known as the Drug Trial of the Century.

While serving a five-year prison term, Stephen determined to become a good person again. He became a Christian and an honor inmate. He was transferred to Boron Federal Prison Camp where he became chief engineer of Inmate Engine Company 52. He left the prison seventeen times driving a fire engine on emergency responses to save lives. He led the response to save the crew of the first B-1A supersonic bomber that crashed in the Mojave Desert six miles from the Boron Prison Camp in 1984.

He was released from prison in 1985 and one year later earned the Red Cross "Certificate of Merit," their highest award for lifesaving, signed by President Ronald Reagan.

In 1987, he became a chief diver and expedition leader for Captain Jacques Yves Cousteau. For over five years, he lived an odyssey of adventure diving with whales, dolphins, great white sharks and swam with molten lava underwater. He then resigned the "Job of his Dreams," to become a full-time lay youth minister and motivational speaker. To learn more about his work with youth visit www.drugsbite.com.

He and his wife Cindy started the Dream Machine Foundation, which has provided free medical and dental clinics in Fiji since 1998. They have treated over 35,000 Fijians for free. To learn more visit www.dreammachinefoundation.com. In August 2019, Steve and his family was adopted by the Fijian Nasukamai Clan, into the House Matairoko (first chiefly house of Fiji) as a brother to the high chief. 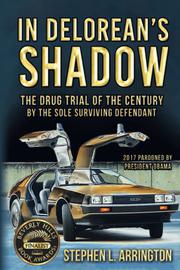 A man who served prison time for his connection to the cocaine conspiracy–scandal that engulfed auto magnate John DeLorean tells the story of his own eventful life.

In 1982, DeLorean was arrested by the FBI for cocaine trafficking, and in the ensuing trial, the colorful auto magnate stood accused of being the mastermind of a $100 million cocaine-money deal involving the Medellin cartel—all part of a strategy to save his struggling car factory. Arrington’s involvement was as a pilot and driver, but he was threatened with hard time if he didn’t turn informant or cut a deal. The author, now the sole surviving defendant in the case, relates these events as a sidelight to a singular life story. During the Vietnam War, he undertook training as a U.S. Navy diver and bomb-disposal specialist: “I did not apply for training as a SEAL,” he notes. “It did not match up with my kinder softer nature. As a bomb disposal frog, my job was mainly to save lives.” His weakness, he says, was recreational marijuana, which later led to the shady influence of Morgan Hetrick, an aviation engineer, entrepreneur, and smuggler. Arrington was being groomed as a partner in Hetrick’s drug schemes when the DeLorean conspiracy broke. He was imprisoned in 1982 with only discipline and religion (Christianity, blended with influences of Eastern and martial arts philosophy) to sustain him. Good behavior and twists in the DeLorean trial reduced his sentence from five years to three. After his 1985 release, he parlayed a background as a “Marine and Related Technologies” instructor into a job with Jacques Cousteau’s legendary oceanographic filmmakers. He also found romance, a stable home life, and philanthropy, and was ultimately pardoned by President Barack Obama in 2017. He’s currently a motivational speaker and drug abuse prevention expert.

Over the course of this memoir, true-crime readers may find a lot fewer pages about the DeLorean affair than they may expect from the title and subtitle, although there are plenty of revelations here for those who mainly know DeLorean’s story from the 2019 movie Driven. That said, very few lives feature stories of swimming with sharks of the narco-syndicates and swimming with sharks below Cousteau’s Odyssey. There are also engaging accounts of Arrington’s manning one of the few prison-inmate firefighter teams, who once dealt with the crash of a top-secret bomber in 1984; living the storied life of a surfer out of a lovingly customized van in the late ’70s; and forming a charity in the Fiji Islands in 1998 called the Dream Machine Foundation, which offered free health care to poor rural Fijians. Documents, photos, and occasional artistic renderings of the author’s adventures at sea supplement the well-told tales throughout, giving the work a scrapbook-album-like appearance, which is forgivable. The work includes a strongly Christian message, but the author stresses that personal responsibility goes along with prayers, and he ends by warning that marijuana is still insidiously tempting for the young, and much more powerful than the drug of the past.

An eventful and turbulent saga that makes for compelling reading.

Encouraging youth to pursue realizable dreams through work, commitment, and a hope that never surrenders

IN DELOREAN'S SHADOW: THE DRUG TRIAL OF THE CENTURY BY THE SOLE SURVIVING DEFENDANT: Reader’s Favorite International Book Awards Winner 2018, 2021