Science fiction, technology and social issues often weave into Sadiq Somjee's work. He is particularly interested in the social implications brought about by rapid changes in both digital and bio-technology. Prior to becoming an author and illustrator, Sadiq studied computer science and spent many years working as a software engineer and technology consultant in the Pacific Northwest.

Sadiq is a full time graphic novelist and lives in Vancouver, Canada with his family. 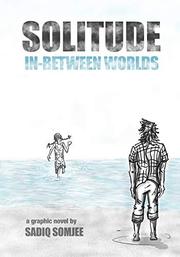 A man flees his unjust imprisonment and takes refuge in the wilderness in this graphic novel.

After living in an internment camp with his family, an immigrant named Ali finally becomes a citizen in his new country. He still unfortunately suffers discrimination there, where people occasionally call him a refugee or terrorist. When the new Total Order Party takes over the nation, the government threatens to separate families. Ali and his girlfriend, Emily, join the protests, but after a particular one turns violent, the T.O. Police arrest Ali. Despite his citizenship, the police classify him as high risk and ship him to a prison somewhere in North America. There, Ali becomes an unwitting participant in neuro-implant experiments intended to alter his identity by giving him new memories. He manages to escape from the facility and makes it to a seemingly deserted place. After taking shelter in an abandoned cabin, Ali searches for ways to survive while sometimes struggling with remembering who he is. As the days pass, the weather turns harsher. Still, a greater predicament may be deciding whether he wants to return to the nation that arrested him or if these woods are his new home. Somjee, who lives in Canada, delivers a succinct, engaging narrative. A few specifics remain unknown, such as where Ali and his family lived prior to arriving in the internment camp. The country that sent Ali to prison is also never identified. But Ali is an appealing protagonist who’s understandably adamant about protesting and who sees his beloved dead sister, Nuri, as a recurring spirit guide. Similarly, the identity-stealing diabolical experiment, though a simplified plot point, is an effective metaphor. The author’s black-and-white artwork is typically filled with vivid details and at its best during transitions between scenes. Ali’s battling the elements—dealing with a heavy snowfall or finding himself submerged in water—is so overwhelming that the art sublimely defies the panels. The story’s ending is realistic and not entirely predictable.