Pat is a playwright and award winning author who has had a love affair with the written word since childhood, many times immersing herself in the stories of Enid Blyton and Carolyn Keene. An active imagination gave inspiration to short stories and her first play as a teen. Her full-length play, The Truth About Lies, was staged at a regional theatrical competition in 2006.  She was selected as "One of 50 Authors You Should be Reading" in 2012. One of her novels achieved a finalist slot in the 2013 International Book Award Contest - fantasy category. And her Daughters of the Crescent Moon Trilogy garnered second place in the 2016 Paranormal Romance Guild Reviewers Choice for Best Series. She is also the winner of the 15th Annual Writer's Digest Short Story contest for A Holy Night. Although still in pursuit of a place truly called home, Pat shares her life with her husband and three cats, all of which claim rule over the house at one point or another. Besides dreaming up the next novel, she enjoys traveling, baking, camping, wine, and of course reading – not necessarily in that order. 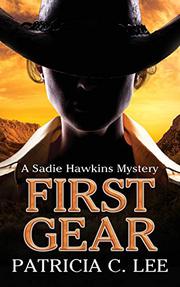 As the story opens, Sadie is struggling to keep her moving business, Hawkins Freight, afloat with the help of her older brother, Blaine. They’re swamped with bills and in dire need of clients. When antiques dealer Lionel Stanton hires Sadie to transport a mummy, among other things, from Houston to Pampa, Texas, she leaps at the opportunity. But what starts out as a seemingly harmless transaction quickly embroils the woman in a mystery when she delivers the freight to a location where no one’s ever heard of Stanton. It turns out that the sarcophagus does contain a dead body, but it’s much more recently deceased. Sadie soon meets the items’ real caretaker, Jeffrey Rogers, who accuses her of theft; she’s also arrested on suspicion of murder. Desperate to clear her name and prove her innocence, Sadie elicits the help of her ex-husband, Clayton Bellows, and Will, a hacker with a kind heart, to get to the bottom of the mystery. Sadie is a tough but lovable character who’s beholden to no one and takes care of herself; she tells readers early on that “what I wanted was not to be tied down and especially hemmed in.” Endearing expressions such as “Holy Hannah” might make it easy for some readers to write her off as merely quirky, but Lee effectively underscores Sadie’s mental and physical strength in several altercations, as when she confronts a man who attacked a member of her family. As a result, this novel is a propulsive, fun read even if the sheer number of scrapes that Sadie survives can feel unbelievable at times.

A brisk, enjoyable tale of a resourceful amateur investigator.

Raised by adoptive parents, Rhiann lives a peaceful life – until an attack perpetuates her destiny, scarring her forever. Bound by lineage as a guardian of a powerful talisman called The Moon, she travels two thousand years to modern day where magic doesn’t exist and the amulet will be safe. Except someone has followed her through time and will do anything to have The Moon, no matter the cost. Duty is Prince Rayja’s edict. To his family, the throne and Leisos’ people. So, when he gets pulled through time with Rhiann, he tells himself it’s to ensure The Moon’s safety and not because the farm girl got under his skin. Regardless that her quiet reserve and compassion with animals tugs at his heart. Only he never makes it to the future. While the life of the prince who she has given her love to hangs in the balance, Rhiann is determined to rescue Rayja from between worlds and find another protector for The Moon. Her strength is tested from friend and foe, modern technology and ancient rituals. The Daughters of the Crescent Moon trilogy comes to a thrilling conclusion in a battle where allies appear from unexpected sources, with the discovery and loss of loved ones and the realization that destiny spans all time.

No-nonsense medical examiner, Kelly Richards, relies on the familiar comforts of science and scalpels to get her through the day. So when a not-so-dead guy who claims he's from the past lands on her autopsy table, she considers calling the men in white coats to escort him to a padded room. But Jarek’s old-world ways and hot gaze trick her heart into falling for him—a mistake she swore she’d never make again. When Jarek, Prince of Leisos, discovers someone he trusts has been slowly poisoning him, he travels to the future in search of a cure. Driven by vengeance, he enlists the help of an impudent scientist to return him to his time. As they try to find a solution, Kelly struggles with her feelings for Jarek while dodging the police and a visitor from her past. Caught between his growing desire for Kelly and the need to expose his would-be assassin before they strike again, Jarek must decide between forfeiting his ticket home or losing the only woman he’s ever loved.
Published: Aug. 22, 2015
ISBN: 978-0994851222

The sorceress Narena has done many things for Leisos – advised the king, helped heal a young girl and sent a prince forward in time to save his life. Now, to protect her people, she may have to sacrifice herself, her lover, her child. Maybe even all three. She hunts for the one who threatens the royal family and the throne of Leisos. And also seeks the daughter taken from her at birth. There’s only one problem. They might be one and the same. What she finds on her quest is love and hate, loyalty and betrayal, and a revelation that will change her life forever. Ardis is a warrior and former captain of the king’s army. His allegiance to the throne lives in his blood – as does the secret he carries. He will protect both at all costs. Even if it means killing Narena or someone she loves.

Written with descriptive prose, this short collection delves into the darker side of human nature about topics pertaining to fear, love, mental illness and aging.