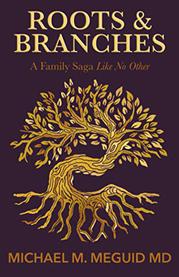 A surgeon recalls his family history and remembers growing up in Egypt, Germany, and England in this debut memoir.

Meguid begins his story in 2009 by describing a fraught airport transfer in New York City when he suffered a cardiac episode while riding in a taxi. The prospect of dying compelled him to recount his ancestral past for the benefit of his children. The autobiography steps back in time to 1905 to recall his paternal grandfather in the village of Beni Harem, Upper Egypt, and relate how his father was sold into bondage. The author swiftly goes on to tell how his father later won a scholarship to a teacher training school in England, where he met Meguid’s mother, a German au pair. They married, and the author was born in Cairo in 1944, to the distaste of his jealous older sister. The siblings were then sent to postwar Hamburg to live with their maternal grandparents before reuniting with their parents in Manchester, then returning to Cairo. Meguid recalls coping with the death of his father at age 11 and attending school in England again at 16 to avoid conscription. The second installment of his memoir, Mastering the Knife(2021), about the author’s medical student years, is narrated in a cold, detached matter. This volume, which includes family photographs, begins in a similar vein, highlighting Meguid’s often tedious obsession with precision: “We have 175 minutes to get from Newark to JFK.” But when he begins to describe his childhood in Egypt, his writing becomes supple and evocative: “I could see the white ibises noisily nesting in the neighboring eucalyptus trees. When they ignored my hoots, I would throw a shoe at them and a few flew away.” He also keenly pinpoints and explains his emotions, offering moving commentary on his father’s absence: “I wanted my father’s touch, the once familiar scent of his skin, his mere presence to hold my hand.” One criticism would be that the author glosses over the period when his father was sold as a child—events readers would be eager to learn more about. Yet mapped against the political turbulence of the era, the expressive memoir powerfully captures Meguid’s shift from a childhood punctuated with uncertainty to the bolstered confidence of adolescence.

A frank and richly described account of a surgeon’s childhood.

An Egyptian-born surgeon reminisces about his time in medical school in this second installment of a memoir.

Meguid’s book opens in 1970 in London, with the author facing his primary surgical fellowship exam—a test that he would fail and have to repeat seven months later. He then skips back in time to briefly recall his childhood, when he was uprooted from Egypt to live with his grandparents in Hamburg, Germany, and Manchester, England, returning to Cairo, where he felt like “a stranger” in his “own country.” Meguid recalls that he first thought about becoming a surgeon at age 11 after having an appendectomy. The author explored the story of his childhood in greater detail in his debut memoir, Roots & Branches (2020). Focusing here on his efforts to become a surgeon from 1960 to ’70, Meguid tells of his Manchester school life, where he was racially abused by his peers, before attending the prestigious University College Hospital Medical School in London. Life as a medical student was not easy for the author; he recounts instances when those supervising him took exception to his race. These are tales of Meguid’s first cadaver dissection; his stint at a hospital in Boston; lessons on how to certify a death; and his work as a locum house officer at a family practice—a role that convinced the author that surgery was his vocation. Meguid also candidly discusses his personal life—his marriage to Victoria, a fellow medical student, and an affair with a nurse named Hanna. The memoir delivers a tale of perseverance and triumph as the budding surgeon steered toward his goals in a country where he often felt like an outsider.

The author’s medical career journey is an inspirational one; he pulls no punches in detailing the prejudice he faced throughout his life because of his race. Recalling painful memories from school, he writes: “For England, I was too dark. For Egypt, I was too pale. My classmates called me by the menacing name ‘gyppo’ or ‘WOG.’ ” Meguid’s openness regarding his relationship with his parents is also enlightening. Regarding the feeling that his mother abandoned him in Germany, he reflects: “She offered no apology, no explanation or remorse. It was as if she had not heard me.” For a surgeon to adopt a precise, clinical tone is somewhat expected. Yet despite the emotional excavation conducted here, the tone throughout is strangely cold. Referring to a woman who expressed interest in him, Meguid quips: “How could she like me that much when I was more enticed by Fred, my cadaver?” Readers who accept the author’s emotionally detached stance will struggle with the memoir’s confused order. Meguid skips back and forth in time without discipline—for instance, he addresses the events of his father’s death on two occasions. The author also repeats his feelings about the British politician Enoch Powell, unnecessarily going over old ground. This framework makes for a disorienting read on occasion. Illustrated with Meguid’s family photographs and a chart showing the requirements needed to pass successfully through the British medical education system in the ’60s, the author’s story is one of valiant struggle, but his stylistic approach is rarely compelling.