Kristy Sweetland is a writer, teacher and coach of transpersonal growth and transformation. She holds a master's degree in psychology and is professionally credentialed as a transformational life coach. Kristy writes exclusively on the subjects of freeing the human spirit, and healing and growth through creative expression. She considers Mother Nature to be one of her greatest teachers, and utilizes eco-psychology, animism, and feminine mythology in much of her work. Kristy has a private practice in northern New Mexico where she assists others through their own spiritual transformations. When not writing, teaching, or coaching, Ms. Sweetland can be found with her husband and cherished dogs, hiking the gorgeous canyons around her home, day-tripping to the glorious Sangre de Cristo mountain range, weekending to the Colorado Rockies, or scrambling around Ancestral Puebloan ruins in the Jemez Mountains. She also shares her life, if not her hiking adventures, with two magnificent indoor felines who appreciate being mentioned. Kristy Sweetland has previously co-authored a book with Nina Brown, called The Fascinated Observer. 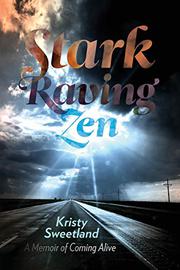 Sensing her mental well-being unraveling, a woman embarks on a road trip that proves to be a mind-expanding voyage of spiritual discovery in this memoir.

According to Sweetland, she had her first conversation with the spirit world when she was about 2 years old and still in her crib. After hearing a female voice say “Be careful,” she recalls a visit by three witches. She reflects that these spirits were “guardians” who would bear “silent witness” to her “life with an alcoholic father and a chronically depressed mother. Through the years of teenage anorexia, escapism with alcohol, and a sense of constant loneliness.” Growing older, the author forged a career in veterinary medicine, but after 20 years in the profession, she felt the urge to quit and take a road trip to California with her dog, Arya. Fate decided otherwise, and she found herself drawn to New Mexico. There, she tells readers, she learned that the guiding voice she had been hearing in her left ear was that of Mangas Coloradas, a 19th-century Apache warrior. The trip turned out to be a catalyst for a spiritual awakening that released her from the bonds of her torturous past. Sweetland depicts a range of phenomena she experienced—including visions, voices, and precognitive dreams—with a sedate, straightforward lucidity. Describing astral travel, she writes: “I left the deep cosmos and reentered the earth’s atmosphere, finding my house safely held by the surrounding fir, cedar, and pine-forested neighborhood. I phased back in through a wall, no need for doors.” The author’s willingness to gaze into the darkest recesses of existence may prove disturbing for some, as when she recalls her mother’s gruesome death following a battle with lung cancer: “As my mother’s crimson blood repainted the white sterility of the hospital floor; every red blood cell jumped from the sinking ship, pouring from her ears, her eyes, her nose.” Besides her ability to shock, Sweetland offers some pithy nuggets of wisdom, drawing on Zen Buddhist influences: “My identity is not my career. I won’t disappear because I’ve quit the only life I have ever known.” Skeptics will struggle with the bizarre nature of the author’s spiritual adventures while those open to ideas of mediums and the existence of higher dimensions should find this book enthralling.

A bold, if occasionally terrifying, personal account of spiritual transformation.

"And it may be that love sometimes occurs without pain or misery." ~ from The Shipping News, by E. Annie Proulx

The Fascinated Observer: A Guide to Embodying S.T.A.R. Philosophy

Shaping our lives, free of judgement and criticism, rests on implementing the principles of S.T.A.R. wisdom-- surrender, trust, allow, receive--as set forth by Nina Brown in her book "S.T.A.R. Philosophy". Attaining liberation through fascination empowers us to create an entirely new way of navigating our lives.
ISBN: 978-0-9826769-3-6