“A well-researched, enthralling history of the fight between Kenneth Starr and the Secret Service. Lichtman’s story is a gripping political drama.”
– Kirkus Reviews 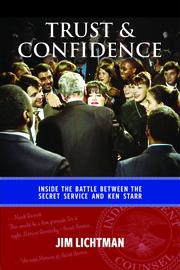 A political work explores the Starr Report and the scandal that engulfed President Bill Clinton from the perspective of the Secret Service.

Lichtman first met Lewis “Lew” Merletti while collecting stories about people who faced difficult ethical decisions for his book What Do You Stand For? (1999). As the first director of the United States Secret Service asked to testify against a sitting president, Merletti became a major figure in Kenneth Starr’s investigations into Clinton’s affair with Monica Lewinsky. In this work, the author hones his journalistic skills in this retelling of the infamous Clinton-Lewinsky scandal from the viewpoint of the Secret Service. Central to Merletti’s opposition to Starr’s questioning of Secret Service agents about Clinton’s private behavior was the survival of the agency itself. If a legal precedent was set that allowed agents to testify against presidents, then future leaders would distance themselves from their protectors, seeking legal cover from partisan investigations. But since agents “can’t outrun a bullet…from across the room,” Merletti stressed that physical proximity to the president was essential to their job, and thus the commander in chief must have full confidence in their absolute discretion. Merletti’s unequivocal stance drew the ire of Starr and other Republicans. Ultimately, to Merletti, who also served under Presidents Ronald Reagan and George H.W. Bush, his opposition to testifying was about the Secret Service’s protection mission. From its opening paragraph, this book is full of absorbing details from insiders, including a captivating account of Starr’s actions to “flip” Lewinsky. The work eschews the salacious details of an extramarital affair for an equally engrossing narrative of the political battle that ensued between the upper echelon of the Department of Justice and Starr’s Office of Independent Counsel. Based largely on interviews with Merletti and other behind-the-scenes actors (with the glaring exception of Starr himself, who declined four interview requests) and newly released documents that are reprinted in the appendices, Lichtman’s story is a gripping political drama.

A well-researched, enthralling history of the fight between Kenneth Starr and the Secret Service.

"The way I'm going to tell you this is exactly the way it happened."

"Shameless, The Ethical Case Against Three Out-of-Control Critics and the Need for Civility Now More than Ever"

The author has a series of campfire chats with the Lone Ranger discussing the ethical values he lives by through a series of adventure stories.
ISBN: ISBN: 0-9648591-0-6

"What Do You Stand For? - Stories About Principles That Matter"

Responses from a variety of individuals to the questionnaire: "What do you stand for? What principles have you lived by? Describe a moment of principle in which your convictions were tested."
ISBN: ISBN 0-9648591-1-4