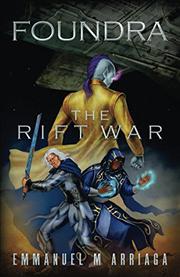 In Arriaga’s sci-fi debut, an elite military team tries to stop a vindictive enemy from a parallel universe hellbent on annihilating races and leaving planets in ruin.

The Huzien Alliance, encompassing various species (including humans), is headed by three immortal Founders: Lanrete, Ecnics, and Cislot. After the Founders’ Elite loses a member in battle, leader Lanrete brings in human Neven Kenk as chief engineer of the Foundra Ascension. Neven undergoes training in physical combat as well as mental defense against Cihphism: a master of telepathy, telekinesis, and more. But the newbie may very well see conflict sooner than he thinks. Someone’s been attacking colonies, the same entity who later orchestrates assassination attempts targeting the Founders’ Elite. A force of evil beings, with Sagren the Fallen Commander at the helm, has managed to squeeze through a rift between the Havin Plane (the natural one) and Enesmic Plane. Newly escaped from prison, the vengeful Sagren destroys whatever he can find, from different worlds to their inhabitants. The team sets out to thwart Sagren and his minions, not the least of which are reanimated corpses. Along for the ride is Lanrete’s pal Soahc, a Cihphist whose skill is legendary. But Sagren is a formidable foe, possibly too powerful for even Soahc—making the Fallen Commander virtually unstoppable. The story is a definitive space opera: beaucoup action with creatures and preternatural capabilities coupled with a bevy of romantic entanglements back on the good guys’ ship. Arriaga wisely concentrates on a select few of the many characters, and Soahc, Destroyer of Worlds, is a standout. The Elite uses call signs (Maj. Jessica Olic is Phoenix) that set the mood for blistering action and also spotlight the protagonist, Neven, who doesn’t get his own sign until the end. Unfortunately, the females, though laudable in the field, are otherwise flat. They’re generally objects of the male gaze (mostly Neven’s) or, in the case of catlike Uri, Tashanira, endlessly crave sex. The final 60 pages burst with lists of characters, character classes, races, and terminology. It’s a helpful guide that will come in handy as the series progresses.

Delightful genre piece with all the right ingredients: monsters, warfare, and romance.

When the elevator cable snaps, they all think they are going to die. Instead, Tasha and her office colleagues find themselves trapped in a fantasy world, the crash only the beginning of their problems as they fight for survival. But the mystery of what happened gnaws at them as they venture deeper into an adventure filled with monsters, mystical weapons, and deadly challenges… A female-led, action-packed fantasy in a Dungeons & Dragons inspired world.

The Huzien Empire has existed for 80 millennia and a powerful invisible force known as the enesmic permeates every aspect of the Twin Galaxy. Neven is an engineer working for the pinnacle of scientific achievement known as the MinSci on the Huzien homeworld of Thae. His genius draws the attention of one of the immortal Founders and he finds himself drafted into the military as part of an elite group of special forces known as the Founder’s Elites. Not given much time to adjust, his team is called to investigate stories of otherworldly creatures attacking fringe colony worlds. Soahc is the most powerful wielder of the enesmic in the Twin Galaxy, he’s also incredibly cocky. That is until he senses a powerful shifting in the enesmic that he can’t explain. Terrified that something is horribly wrong, Soahc leaves his comfortable planet and hitches a ride with Neven and the Founder’s Elites as they investigate the carnage on the fringes of the empire. Neven, Soahc and their allies discover something ancient from another plane of existence. Something that exposes the fragility of their galactic empire as they fight to survive annihilation from enesmic beings.
Published: July 30, 2019
ISBN: 978-1097390960