Dana Mack is an historian, writer, and musician living in Connecticut. Author of the newly released, All Things That Deserve To Perish: A Novel of Wilhelmine Germany, her other books include The Assault on Parenthood: How Our Culture Undermines The Family (Simon & Schuster; Encounter Paperbacks) and The Book of Marriage: The Wisest Answers to the Toughest Questions (Eerdmanns). Her articles on history, music, culture, education, and family issues have appeared in The Wall Street Journal, the Christian Science Monitor, the Washington Post, the LA Times, USA Today, Commentary, The New Criterion, and many other publications.

“Lisi is a character worthy of Edith Wharton. ... A rich tale set in the underexplored Wilhelmine Germany.”
– Kirkus Reviews 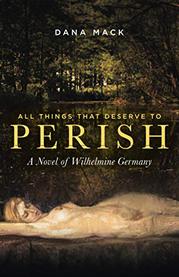 ALL THINGS THAT DESERVE TO PERISH

In this historical novel, a young Jewish musician navigates the pressures of love and intolerance in fin-de-siècle Germany.

Berlin, 1896. Promising young pianist Lisi von Schwabacher has just returned home from three years of study in Vienna. Her great talent—as well as her father’s banking fortune—quickly attracts suitors, including Wilhelm von Boening, the son of a count who owes Lisi’s father quite a bit of money, and the widower Prince Egon von Wittenbach. But Lisi is not impassioned by the idea of settling down as a wife, especially since modernity is quickly supplying alternate models for how to exist as a woman in society. Her father’s cousin Countess von Kalckreuth, for example, is wealthy, unmarried, and a well-known hostess of salons—a remarkable position of independence and prominence for a Jewish woman. Lisi wants to be modern as well, leading a life built around art and ideas rather than her ability to bear children or finance a husband’s pursuits with her father’s money. With this in mind, she begins an affair with the poor but handsome Wilhelm even though she has no intention of marrying him. At first it is exciting, but a pregnancy soon reveals her incautious fling to be a life-altering error. Her options are not as clear-cut as they may seem. First of all, Lisi is convinced that Wilhelm is much more interested in the von Schwabacher fortune than he is in her. Second, her father’s warning about the latent anti-Semitism of gentile suitors continues to ring in her ears: “It’s always the same story. These noblemen who marry Jewesses want only their money, and not their children.” Can Lisi still carve out the life she imagined for herself, or has she fallen into one of the many traps laid by a society eager to squash the ambitions of both women and Jews?

Mack’s elegant prose summons the era by evoking the literature of the time period. Readers can be forgiven for thinking they are perusing a genuine Victorian novel: “This encounter, the first since the final lunch at Kleinneubach, deeply unsettled Boening. For several minutes after it, he felt a dull heat rising and falling in his innards, as well as a mental haze so acute that he was beset with the impulse to shake his head free of it.” The book often makes use of letters, which are both linguistically convincing and quivering with intimated desires. Lisi is a character worthy of Edith Wharton, compellingly driven and finely flawed. Her Jewish background, paired with the German setting, lends additional dimensions to what might otherwise be a fairly conventional bit of historical fiction. The supporting characters are also drawn in enticing detail, transcending the archetypal roles they fill as relatives, friends, and potential lovers, particularly Lisi’s parents, Magnus and Susannah, and her cousin Klara. Mack succeeds in delivering the two primary expectations of this sort of novel: Readers will be thoroughly immersed in the time period and fully invested in the fate of its hero.

A rich tale set in the underexplored Wilhelmine Germany. 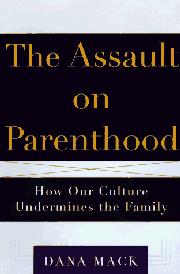 THE ASSAULT ON PARENTHOOD

Return parenting to parents. That's the message of this thoughtful and challenging attack on the ``nanny state.'' Liberal and conservative ideologues alike will flinch as Mack, a scholar at the Institute for American Values and a parent, variously assails and defends government and intellectuals for their roles in reshaping the family. Mack talked to 250 parents across the country (mostly married and in the middle-income bracket). She also combed the literature for the views of psychiatrists, educators, politicians, community activists, and other researchers concerned with child development. The gist of her message is that academics and institutions, beginning a century ago but increasingly in the past three decades, have usurped the parental role in shaping children's characters and values—and it isn't working. According to Mack, among the company of villains are psychotherapists like Susan Forward and Alice Miller, who have framed parents as ``toxic'' and ``narcissistic''; educators, who have taken on the job of distributing condoms in lieu of reinforcing parental values about sex; and lawyers and judges, who tout children's rights over parental rights. The press and the entertainment industry also come in for criticism, as does an economy that forces both parents into the workplace and provides few safety nets. Parents, says the author, are finally fighting back by schooling their children at home and by seeking changes in the workplace, pressuring for flextime, for home-based work, and for the right to bring babies to the office. The author offers seven actions government can take to ``regain the trust of parents,'' among them tax relief and parental leave. Mack is a little behind the wave—even the schools now acknowledge that parental involvement is critical to academic success—and her views sometimes seem simply to echo those of the families she interviewed. Nonetheless, she does children and harried parents a service by assembling in one volume vivid accounts of the varied political and social forces that are damaging families today.