After years of living overseas and working with humanitarian aid projects in Paraguay, Honduras, Haiti, Morocco, and Burkina Faso, Cynthia D. Bertelsen now resides in Gainesville, Florida. There she writes and cooks and enjoys ice-free winters.

Summers are another story.

She is the author of seven books:

* “A Hastiness of Cooks”: A Practical Handbook for Deciphering Historic Recipes and Cookbooks

* In the Shadow of Ravens: A Novel

* Wisdom Soaked in Palm Oil: Journeying Through the Food and Flavors of Africa

* Take a Goose or a Duck: Eclectic Essays on English Cookery Through the Ages

Her current work-in-progress is a collection of stories about Haiti, Mangoes & Roosters: Stories and Tales from Haiti.

She has contributed numerous articles to various food encyclopedias, as well as dozens of book reviews for The Roanoke Times, The New York Journal of Books, Library Journal, and The Digest of Middle Eastern Studies (DOMES). Her columns for the Cedar Key Beacon in Cedar Key, Florida covered culinary history when few writers and academics paid attention to the subject. She holds a B.A. degree in Latin American Studies, an M.A in History, an M.S. in Human Nutrition and Foods, and an M.L.I.S in Library Science. Read more of her writing on her blog, “Cynthia D. Bertelsen: Gherkins & Tomatoes … Since 2008,” at cynthiadbertelsen.com. 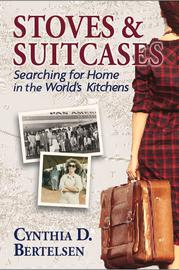 A woman looks back on a peripatetic life via recollections of memorable dishes in this rollicking memoir and cookbook.

Novelist and food writer Bertelsen recounts her youth growing up in Washington state and Florida and many periods spent abroad while working with the U.S. Peace Corps and accompanying her husband, an official with the U.S. Agency for International Development, to foreign postings. Her travels took her from Milwaukee to Morocco to Machu Picchu and included some tense and even terrifying moments, from a bout of altitude sickness in Bolivia that had her vomiting until a cup of coca tea settled her stomach to a menacing encounter with a band of Sandinista rebels in Honduras and a riot in Port-au-Prince after the overthrow of Haitian dictator Jean-Claude Duvalier. These episodes are entwined with reminiscences about iconic meals—each chapter concludes with a recipe—and these culinary experiences resonate with the greater narrative. The warmth of her childhood home is conveyed by recollections of her father’s vegetable beef soup, while the grinding poverty of Burkina Faso is brought to life by her relationship with a sick woman who sold her produce that grew more withered as the dry season progressed. Bertelsen’s novelistic prose features dynamic scenes and vivid detail: “Mr. Tartar Sauce grabbed Lee and kissed her right on her big red lipsticked mouth,” she writes of an assault by a drunken man on a cook in a Florida seafood restaurant where she worked. Her food writing is also rich and sensuous—“the crunchiness of the flautas, paired with the creaminess of the guacamole and the crema, seasoned with a squirt of fresh lime, fired with the hot bite of green salsa”—and sometimes nearly carnal: “I ate like a wolf with a fresh kill, gulping the food on my plate in gasping, almost orgiastic bites, wadding up balls of bread and stuffing them into my mouth.” The end result is a truly mouthwatering read.

A tasty stew of gripping stories and evocative foodie lore.

“It seems to me that our three basic needs, for food and security and love, are so mixed and mingled and entwined that we cannot straightly think of one without the others. So it happens that when I write of hunger, I am really writing about love and the

"A Hastiness of Cooks": A Practical Guide for Use in Deciphering the Mysteries of Historic Recipes and Cookbooks: Gourmand World Cookbooks Best in the World for Culinary History, 2020

STOVES & SUITCASES: SEARCHING FOR HOME IN THE WORLD'S KITCHENS: Gourmand World Cookbooks Best in the World for Food Writing, 2022

"A Hastiness of Cooks": A Practical Guide for Use in Deciphering the Mysteries of Historic Recipes and Cookbooks

Wormwood Cakes, Quodling Pie, Sosenga, Hennys en bruet … Do you like to read old cookbooks and perhaps even yearn to cook some of the recipes, with their enticing names? “A Hastiness of Cooks” takes you step-by-step through the process of recreating recipes like these for the modern table. By the time you reach the end of the book, you’ll be able to: * Analyze the subtext of historical cookbooks, regardless of their culinary patrimony and time period * Decipher archaic language * Choose the correct equipment and ingredients * Cook with a wood fire on a hearth or three stones on the ground * Research historical accuracy with various print and online resources * And much more. "A Hastiness of Cooks" is not just for chefs and cooks. Living-history interpreters, battle reenactors, writers of fiction and nonfiction, historical archaeologists, historians, artists, and just about anyone interested in how people cooked and ate in the past will find much meat (and vegetable) in this concise handbook.
Published: April 11, 2019
ISBN: 978-0692195574

In the Shadow of Ravens: A Novel

Julian D’Arcy knows her family is different. Very different. To preserve their legacy as talented healers, she wanders from place to place, forced to seek safety as she rebels against the prejudices and ignorance of seventeenth-century England. A final desperate decision changes everything when the future once again becomes uncertain. In the Shadow of Ravens portrays the forbidden practice of witchcraft as it evolved in seventeenth-century England. But, more than that, it is the story of a family of strong women, of healing, of cooking, and of love.
Published: Sept. 18, 2019
ISBN: 978-0578552217

Meatballs & Lefse: Memories and Recipes from a Scandinavian-American Farming Life

Award-winning author and city girl Cynthia D. Bertelsen grew up in eastern Washington state, in Palouse wheat-farming country. Her father, a plant pathologist, researched diseases of wheat and cacao at a local university. And every spring he planted a big vegetable garden and tended the many fruit trees in the backyard of their old farmhouse, built in 1888. For heat, the house boasted a dilapidated oil burner in the middle of the living room. So, on most winter mornings, frost a half-inch thick covered young Cynthia's upstairs bedroom window. Despite this fleeting taste of rural life, when she married Mike Bertelsen, Cynthia had a lot to learn from her Norwegian-American mother-in-law Ethel, both about farming and life in general. Ethel's Norwegian ancestors immigrated to America in the 1850s and settled in western Wisconsin, where they farmed for decades. With her Danish husband Knute, Ethel raised six children on a small family farm amid the challenges of the twentieth century: the Great Depression, World War II, the Cold War, polio epidemics, the social upheavals of the 1960s, and the fluctuating economic fortunes of dairy farming. The day-in-day-out routine of milking, tending to crops and livestock, preparing immense meals for threshing crews, and sometimes dealing with poor harvests meant much hard work, and often heartbreak. Through recipes, family anecdotes, photographs, and historical musings, Meatballs & Lefse tells the story of the relationship between a young bride and her mother-in-law, each coming from different worlds, yet united by love of family, the kitchen, the land, and each other. Meatballs & Lefse also shines a light on Scandinavian-American immigrant culture and cuisine.
Published: Sept. 2, 2020
ISBN: 978-1734557916

Known as the meat of the vegetable world, mushrooms have their ardent supporters as well as their fierce detractors. Hobbits go crazy over them, while Diderot thought they should be “sent back to the dung heap where they are born.” In Mushroom, Cynthia D. Bertelsen examines the colorful history of these divisive edible fungi. As she reveals, their story is fraught with murder and accidental death, hunger and gluttony, sickness and health, religion and war. Some cultures equate them with the rottenness of life while others delight in cooking and eating them. And then there are those “magic” mushrooms, which some people link to ancient religious beliefs. To tell this story, Bertelsen travels to the nineteenth century, when mushrooms entered the realm of haute cuisine after millennia of being picked from the wild for use in everyday cooking and medicine. She describes how this new demand drove entrepreneurs and farmers to seek methods for cultivating mushrooms, including experiments in domesticating the highly sought after but elusive truffles, and she explores the popular pastime of mushroom hunting and includes numerous historic and contemporary recipes. Packed with images of mushrooms from around the globe, this savory book will be essential reading for fans of this surprising, earthy fungus.
Published: Nov. 15, 2013
ISBN: 978-1780231754

Take a Goose or a Duck: Eclectic Essays on English Cookery Through the Ages

From fat dormice to spicy Tikka Masala, Take a Goose or a Duck outlines the incredible journey of English cooking through the centuries. What did the Romans cook in Britannia? Where did Henry VIII’s Hampton Court cooks get the ingredients needed to feed hundreds of people every day? How did English sailors survive long voyages to the New World? Why did English manor houses like Highclere Castle, the real Downton Abbey, come about? What lies behind recipes inspiring participants on “The Great British Baking Show”? Why is English cooking the Mother Cuisine of the United States? And why is culinary appropriation a fallacy? Using original sources, historic cookbooks, and vintage recipes, Cynthia D. Bertelsen explores England's vast culinary history in this collection of quirky and provocative essays.
Published: May 30, 2022
ISBN: 978-1734557930

Wisdom Soaked in Palm Oil: Journeying through the Food and Flavors of Africa

In Wisdom Soaked in Palm Oil, award-winning Cynthia Bertelsen celebrates the cooks and spectacular cuisines of Africa. At the age of nine, she read the chapter on Morocco in Walt Disney’s People and Places, and her interest in Africa never diminished. That interest only increased once she’d lived in Africa for several years. With musings on history and books, people and places, Wisdom Soaked in Palm Oil leads the reader into the vibrant, flavorful world she experienced. A series of fifty chapters?replete with recipes?reveals the culinary richness and wisdom found in the kitchens of Africa, from Morocco to South Africa and all points in between. “Proverbs are the palm oil with which words are eaten”~ Chinua Achebe, Things Fall Apart
Published: March 10, 2020
ISBN: 978-1734557909