Buck Wyndham graduated from college and joined the Air Force to fly his dream airplane, the A-10 Thunderbolt II―also called the "Warthog." He became one of the very first pilots to take the mighty Warthog into battle, flying numerous missions during Operation Desert Storm. He went on to fly the T-38 Talon as an instructor, training new Air Force pilots. He is currently a Captain for a major U.S. airline, and also continues to fly privately-owned, surplus military jets as a test pilot and instructor. Buck has written several articles for magazines including Warbirds, Classic Jet Journal, and Warbird Digest. A skilled photographer and videographer, he enjoys vintage aircraft, world history, driving his railroad speeder, and exploring ghost towns. He is working on his next book, a novel entitled Red Air. 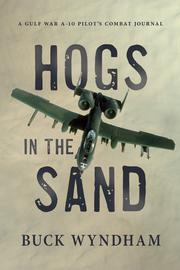 HOGS IN THE SAND

In this debut military memoir, a pilot flies an iconic plane into the jaws of the Gulf War.

Wyndham wanted to be an A-10 pilot ever since he was 11 years old, when he first saw the planes fly over a South Carolina beach. The author achieved his goal, entering the Air Force and finally getting to pilot the so-called Warthog, a sturdy, air-to-ground attack plane famous for flying low and taking a lot of incoming fire. “In addition to the world’s most powerful forward-firing aircraft-mounted gun protruding from its snout,” writes Wyndham, still as enthused as he was in childhood, “the Warthog’s thick, Hershey-bar–shaped wings could carry a vast assortment of bombs, rockets, and missiles. The plane was designed to kill just about anything on a battlefield.” When Wyndham joined up, Warthog pilots did little more than fly intense Cold War exercises, but he and his comrades soon found themselves on the front lines of a very hot war in the Middle East. In the battle against Saddam Hussein’s military—the fourth largest in the world at the time—the Warthogs were the bulwark protecting the rest of the United States advance. The Gulf War put the Warthog’s dexterity to the ultimate test and tried the author’s nerves both on the battlefield and off. Wyndham’s prose is taut and punchy, capturing the speed and violence of his missions: “I level out momentarily, then roll and dive for the deck. The bad guys are going to be very pissed off in just a few seconds, and they’ll probably start shooting at me. As I head toward the cover of a nearby hill, I jink aggressively, throwing the airplane around in an unpredictable way to foil their aim.” Based on the author’s diaries, the book recounts the Gulf War on nearly a day-to-day basis, tracking not only Wyndham’s missions, but also his attempts to win the heart of an assistant maintenance officer. It’s a sometimes disturbing ode to a very deadly machine—the author does not let himself spend much time thinking about the people on the receiving end of his bombs—but it makes for a unique examination of a war that was primarily won in the air.