While Dr. CS Matthews specializes in studying new religious movements, occultism, conspiracy cultures and paranormal experiences in the wild, her real passions lie in ancient and obscure languages. Moving beyond advanced degrees in Religion and American Cultural Studies, Dr. Matthews has pursued her fascination with old cultures by studying South Asian Sufism, Baltic shamanism and Algonquin spirituality from Indigenous and traditional teachers. She has taught history, ethics, the social sciences, religious studies, and mysticism at major universities, military academies, the neighborhood coffeeshop and sometimes her own back porch (where her fans call her Professor WHAM). Dr. Matthews has been a journalist and entrepreneur and currently does cybersecurity training for major educational agencies in the Northeast United States. She has published poetry, short stories, academic papers, a textbook on New Religious Movements and her most recent overview of paranormal experiences in the Hudson Valley. 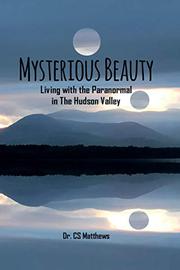 This substantial work by Matthews takes a broad-spectrum look at the wide variety of paranormal stories that have come out of the Hudson Valley, an area of 7,200 square miles surrounding the Hudson River, extending over 315 miles from the outskirts of New York City to the Adirondacks. For thousands of years in that area, the author points out, “haunted structures, strange lights in the sky and mysterious creatures in the forests are almost taken for granted, or at least the stories are.” The region, bordered by “the Catskills in the west, the Taconic range to the east, the Shawangunks running up from the south and west, and the Adirondacks at the northern edge,” is thickly forested and gnarled with ancient rock formations. The land has been populated by humans for millennia, from the Lenape, Mohican, and “Haudenosaunee (Iroquois)” to the European settlers whose New World towns and industries are immortalized in the Hudson Valley stories of Washington Irving. Matthews sees Irving’s tales as “absolutely foundational in understanding how this region came to be seen, not only by the rest of the United States, indeed, perhaps the world, but also how residents of the Valley came to see themselves.” Consequently, the vivid and enjoyable stories gathered in these pages range far beyond Irving’s “The Legend of Sleepy Hollow” and its Headless Horseman. Readers encounter inquisitive extraterrestrials, menacing little people of various kinds, ravenous Native spirits, and of course the king of cryptozoology, Bigfoot (“It was definitely not a bear,” reports one witness, “because of how it was walking”). Throughout all this, Matthews perfectly matches impressive research with a born fieldworker’s ear for the evocative personal interview. Nowhere in these accounts is there either condescension or credulity. Instead, each anecdotal thread is given the serious treatment that makes every chapter thrillingly involving.

An encyclopedic and immensely entertaining history of the Hudson Valley’s long otherworldly tradition.

Final Season: Monsters & Eldritch Horrors May Be No Match For Humanity's Capacity For Evil, 2017

New Religions (Religions of the World)