Colin Robertson, originally from Toronto, Canada, became an indie author in 2012 with the publication of his debut novel, 'The Siege of Walter Parks'. Since then, he has published three more works, including his 2015 Forward Reviews award-winning sci-fi satire 'Chaos Theory', and critically acclaimed, 'Spyware' (2018). His most recent book is first fantasy novel, 'The Orcs of New York' (2022). He is also the author of several short stories and currently lives with his wife, son, daughter and loving, if somewhat neurotic dog, Zero, in Culver City, California. 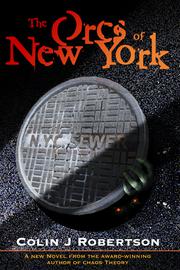 THE ORCS OF NEW YORK

A businessman plans to exploit a portal to a magical realm in this fantasy adventure.

Marc Aaron has a knack for finding oil. He’s traveled all over Africa and the Middle East, guiding his small company, Epoch, to success. When billionaire Roland Griff summons him to New York, Marc leaves Libya immediately. In anticipation of a thrilling new job prospect, Marc asks his wife, Diane, and their children to meet him in Manhattan. The oilman reunites with his family at the Waldorf Astoria hotel after two years apart. Marc receives a chilly reception from his wife and his daughter, who asks, “So, how’s the greenhouse-gas biz going?” Soon, the family is touring the Griff Corp building. To his astonishment, Marc learns that the company’s success with importing goods and materials is the result of a magical gateway. In a subterranean chamber, a strange glowing orb gives Griff access to a medieval realm of elves, orcs, and other magical beings. Griff wants Marc’s expertise in acquiring this Fourth World’s resources. When armed soldiers prepare to enter the gateway, the general, an orc, launches his invasion plan. Robertson has ensured that there’s fun, heart, and excitement in every scene of his latest novel. Marc and Diane’s rocky marriage is a drama on par with the orc invasion; he takes Griff’s offer without consulting her so the family can finally live together. When war hits the city’s streets, events remain entertaining, with a measured amount of gore that never feels gratuitous (“The headless troll turned and felt about awkwardly for its missing cranium”). Robertson’s comedic timing is phenomenal, as when a blowhard general admires his vanilla latte by saying, “If our boys had these in ’Nam we’d have won that war.” Moral and environmental reckonings factor into the finale, e.g., Griff tells Marc, “Drilling for oil, exploiting the locals is what we do, you and I.” A last-minute gambit sets up a potentially bold sequel. 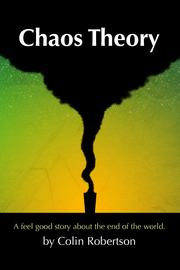 It’s the end of the world as we know it in this fine Dr. Strangelove–ian satire about the mad search for a doomsday device.

Robertson’s (The Siege of Walter Parks, 2012) self-billed “feel good story about the end of the world” may not be completely unique, but it is exceedingly clever and entertaining and, at times, spot-on loony. Thirteen-year-old Alex Graham and his friend Gerald find a thermos-shaped canister labeled “Top Secret” and “Property of the United States Government.” No sooner does Alex put it up for bid on eBay than he finds himself hunted by mercenaries and the CIA. The elusive canister turns out to be a long-lost weapon of ultimate destruction created by a Dr. MacGuffin (likely a sly reference to Alfred Hitchcock’s signature plot device of a desired object that drives a story). The United States, led by an ineffectual president who fancies himself a poet, wants it back, but others, including a stereotypically drawn Islamic terrorist and a German arms dealer, have their own designs on the elusive weapon. CIA agent Charlie Draper, whose own world ended with the deaths of his wife and daughter, takes Alex under his wing as the search becomes more frantic and the body count escalates. Robertson is adept at balancing the story’s farcical and gritty elements. The book’s violence is sudden and punishing, which underscores the high stakes and invests the story with a gravitas that makes its absurdist passages even funnier. That said, the humor is hit-or-miss; all the jokes can’t be good, as Groucho Marx once said, but readers, after wading through an opening disclaimer, a preface, a few words about the book’s science (“There isn’t any”), and a faux introduction that extols the book’s silliness, might be tempted to ask the author to get on with it. The invented quotes (“‘Do I really sound like that?’—R.M. Nixon”) that head most chapters also become increasingly tiresome. That said, there are also some sublimely silly passages whose deadpan musings recall the late Douglas Adams.

Readers will likely be sorry to see this book (and the world) come to a conclusion. 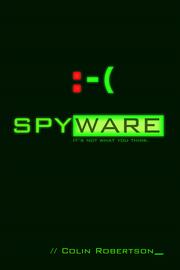 A gray-hat hacker may be the world’s only hope in stopping a virus that seems to be driving people mad in this sci-fi thriller.

Eddy Pending spends much of his time in his Los Angeles apartment interacting online with his hacker group, Ignominious. But the 28-year-old is happy to go outside when his attractive prosecutor neighbor, Gwen, needs help with a computer virus. Eddy, in spite of his skills, is surprised by the virus, which deletes itself after perceiving his software as a threat. Eddy captures a “tiny fragment” on a thumb drive and names it Geppetto, which appears in the virus’ code. Seeking information on Geppetto via Eddy’s online community ultimately leads to an anonymous, cryptic warning (“Beware the Men in Rose Colored Glasses”) and those dangerous fellows later kicking in his door. Eddy hides at Gwen’s apartment, which only makes both of them targets. Whoever is after them has frightening capabilities: A TV broadcast turns people into crazed mobs that are all apparently intent on killing Eddy and Gwen. Accordingly, trusting anyone is a near impossibility, but Eddy may have a solution: an antivirus of his own design that, with any luck, will counter mind-controlling Geppetto. Despite a tongue-in-cheek approach, Robertson’s (Chaos Theory, 2015, etc.) novel is a rich, engaging story. Eddy, for one, is an appealing protagonist; he’s socially awkward but with hero qualities, like devoting himself to a plan he believes could likely fail. Moreover, his gradually revealed past, including his severely depressed mother, adds sympathy. Jokes are funny without sidetracking the narrative; though Eddy and Gwen appear to be delusional paranoids, one character reassures them with the line “People in rubber rooms shouldn’t throw imaginary stones.” As the tension-ridden tale progresses, the virus becomes more widespread (with riots in major cities) while the villain and his plan come to light. Details of the diabolical plot, from motive to execution, are increasingly convoluted, but the story retains logic until its stellar ending.

Chaos Theory: A Feel Good Story About the End of the World

“There is no order in the world around us, we must adapt ourselves to the requirements of chaos instead.” — Kurt Vonnegut, Breakfast of Champions