Valentin Per Lind was born in 1959 and studied History and English Literature at Leicester University, though, if he had his life again, he might well have chosen theology also, since this has been a topic of endless fascination throughout his life. He is passionately interested in the Greek Mystery Cults, Jewish Qabalah, Christian mysticism and the European Witch-Cult of the Middle Ages, entailing some lengthy discussions in many of the poems’ notes. From his earliest days, he thrilled to Beowulf, and its abiding image of the Norse hero battling monsters, and the Homeric epics fired his imagination. At university, he was heavily influenced by the Romantic poets of the early nineteenth century as well as the later Victorian poets such as Tennyson, in particular Tennyson’s Idylls of the King with its re-imagining of the Arthurian cycle. Combined, these influences engendered a love of poetry that endures to this day. Major influences on his imagination are the ghost stories of M.R. James, the Cthulhu mythos of H.P. Lovecraft, and the supernatural poems of Edgar Allan Poe, with their inspired cinematic adaptations by Roger Corman. Following university, Valentin rejected his parents’ attempts to force him into a professional career, and instead left home to join a Rajneesh meditation commune, but the pagan element in his blood won out and after a meeting with Maxine Sanders, he was initiated into the Temple of the Mother, an Alexandrian coven under the Eldership of Maxine. This, and subsequent journeyings into the occult, has inflected his poetry with a strong sense of the macabre. Valentin Per Lind has been writing poetry for thirty-five years, although the last ten years have seen his greatest output. His first book was Corvix, was widely acclaimed, and September 2022 will see the publication of Corvix Expanded Edition which has been extensively revised and reformatted with twenty-six new poems. 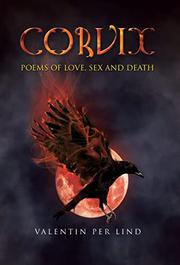 Mythology, mayhem, and the macabre roil this set of haunting poems.

Lind includes some 55 pieces written over 35 years, many of them infused with self-consciously archaic language and themes. His earlier poems have a highly rhetorical sensibility, as in the phallic anthem “Priapus”: “With what shall ye compare my hideous strength, / Mere Man? / With the night-black bull that rears and spits / In its cloven lust?” His middle-period poems often deploy a singsong style whose seeming simplicity and artlessness disturbingly highlight sinister, sometimes-violent content, as in “The Pretty Magpie”: “Once I loved a little dog, / A golden spaniel bitch, / They came and shot it all to death / And left it in a ditch.” His late period casts poems in an idiom that’s more modern and impressionistic in its continued treatment of fraught, primal material, as in “The First and the Last.” He also offers a long adaptation of the Icelandic saga of Gunnar and Hallgerður, about a woman who brings her husband nothing but trouble; it’s a riveting, gore-spattered epic suffused with eerie Nordic hallucination: “And woven into her straggled hair, / The bones of children / That rattled and clinked in the wind.” Lind’s poems feature strong narratives, bold voices, and evocative imagery that’s besotted by both Eros and Thanatos, as in the title poem, a gothic imagining of a crowlike lover that’s an inspired mashup of the work of Edgar Allan Poe and Charles Baudelaire: “I am but carrion for your clever mouth / And quick, sharp fingers that rake and rack.” Overall, this collection is a great read for those who like hotblooded verse.